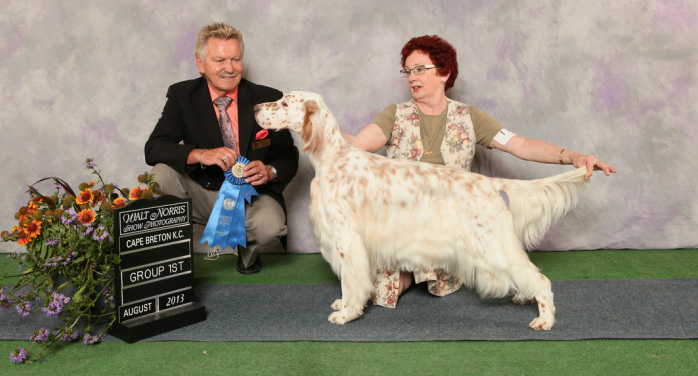 Isleen is Plaisance's quickest to attain her CKC title. She finished in 3 shows  at 9 1/2 months on a Group 1 win. Isleen had a BPIS win and a Group 2  her first day out.  She is a RBPIS and a multiple Puppy Group winner and Group winner. Isleen finished the 2012 show year with a BIS win at the NKC November shows. Isleen received the 2012 English Setter Club of Canada Top Puppy Award. We are looking to have some fun in the ring with my busy Queen Bee.
Isleen  became  a Canadian Grand Champion on August 3, 2013 at the Avalon Kennel Club shows under Judge Kim Hamel. She is my 1 st female Grand Champion.    Pictured above winning a Group 1st in Cape Breton, NS  under Judge Doug Gaudin. The fun continues!!! Isleen starts 2014 with a  BIS under  Judge  Richard Lopaschuk on March 2 at the NKC shows. Her many Group wins during the year  made her 2014 ESCC Top Sporting Group Bitch.  Isleen was awarded 1st Female Award of Merit at the 2015 English Setter Club of Canada National Specialty. On July 4, 2015 Isleen completed the requirements for her Rally Novice title.  Isleen just received her GCH. EX.  certificate from CKC being the
1st female Breeder, Owner Handler Grand Champion Excellent English Setter  in Canada to achieve this title.
In 2017 , Isleen was # 6 English Setter in Canada. Gone by Never Forgotten. 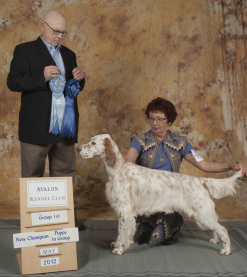 Isleen has all 4 health clearances.